Learn more about where we came from! 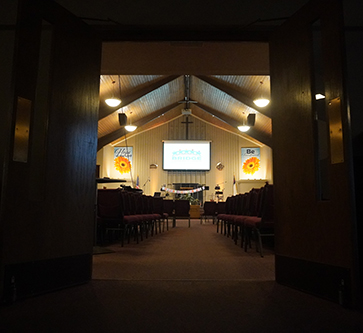 Radio Temple was founded in 1929 on 12 Mile Road at Gardner in Berkley, Michigan by Rev. H. Ed Weinzierl, who served until 1960. During the Great Depression, the church grew rapidly and became well-known for its healing and radio ministries. In 1971 this congregation moved to Beverly Hills and became Beverly Hills Alliance Church, eventually renamed to be Crossroads Alliance Church. In December 2003 Vietnamese Grace Alliance Church began meeting at Crossroads and shared the building.

Glen Oaks dates back to 1928 in the city of Clawson at 176 Bowers Street.  This church was the vision of Rev. H. Ed Weinzierl who was then Pastor of the quite new Radio Temple in Berkley and was the "circuit rider" pastor for many months until the structure was completed and a full time pastor was called. Over time the facility in Clawson was no longer suitable for growth, building, or expansion.  Ground was broken at the current site at 5700 Rochester Road in Troy in April 1968; the congregation moved and began worship services there in March 1969.

Crossroads Alliance Church joined the Glen Oaks Alliance Church on Sunday, May 1, 2008, and was renamed as Bridge Community Church in August.We are part of the Christian Missionary Alliance (C&MA), which celebrated its 125th anniversary in 2012.  Please see below for more information on the C&MA.We marvel at God’s providence in the way He puts the "body" together for His purposes.  It is our constant desire that we sense His presence among us and by the enabling of His Spirit we worship Him properly and be about His work.

The C&MA began in 1887 and has grown to nearly 2,000 congregations in the United States, speaking 37 languages and dialects. There are also National Churches in more than 50 countries around the world. The founder of the C&MA was A.B. Simpson who had an intense passion for the Lord and to see the nations come to know Christ. A.W. Tozer, author of the classic, The Pursuit of God and other well-known spiritual classics, continued the great tradition of the C&MA by balancing the hunger to know God intimately and to make Him known in every nation. This has led the C&MA to send more than 700 workers to 70 countries helping to fulfill the task of taking the gospel to all the nations.